The term Services Domain is used as the term SDP (Service Delivery Platform) is simply too ill-defined, abused by suppliers, and limits its scope by presuming a box with interfaces (legacy telco-thinking).  Rather today operators are implementing an IT-centric architecture so they can deploy new services faster and maintain / improve legacy services at a lower cost.  Depending on the operator’s situation the services domain can vary from a global multilayer, multi-country architecture; through an extension of the existing back-office SOA (Service Oriented Architecture); to a web-centric, cloud based architecture.  Its is becoming as important as the network domain and the IT domain, hence the term Services Domain is used in the report.

The report brings together over two decades of experience from being at the bleeding-edge of service innovation in telecoms. Producing a report is not something I typically do for a number of reasons. People tend not to want to pay for reports; their vendors provide free consulting services, and analyst firms in co-operation with the vendors (the analysts’ main source of revenue) produce free reports and guidance. Unfortunately people in the industry tend to ignore the vested interests behind such free advice. So if making money from this report is going to be difficult, why bother?  Someone’s got to try to act as the industry’s conscience, so I’m having a go.

The share of voice in our industry is dominated by the vendors; the messages in that voice have a singular purpose, encourage operators buy more stuff. We’ve seen it in 3G/UMTS and IMS and are currently seeing it on LTE and RCS-e. As an industry we need to spend cash more pragmatically, being first to launch something is not necessarily the wisest move. Announcing yet more confusing terms to customers such as LTE or VoLTE or RCS or 4G, without a clear meaningful customer benefit is simply wasting cash we increasingly cannot afford to waste. We’re going to need to start tightening our belts and make pragmatic investment decisions that impact our customers’ experiences not our network bragging rights.

Services are critical to the industry’s past, and will be to its future. We obsess about being a “dumb pipe” while there are opportunities everywhere that we choose not to grasp, or grasp in embarrassing self-focused ways. Telcos are currently structured to institutionally kill service innovation. Just look at the track record over the past two decades. People and Processes must change before technology.

The Services Domain has emerged due to the reality of IT economics, technology maturity, and learning from three decades of failure in trying to get an SDP (Service Delivery Platform) to work.  The aim of the report is to bring together the successes we’re seeing in the market through a series of case studies, an independent survey of the market to capture the reality of where we are and what we are planning, with a set of independent recommendations on how we can move forward and better institutionalize service innovation rather than kill it.  I’ll review the report soon on this weblog, currently I’m still working through the 100+ questionnaire responses…

But back to the interesting data.  I show below three diagrams.  The first is an average of the Telecom industry’s total global revenues from supplier estimates, my analysis, and CAGR (Compound Annual Growth Rate) estimates from 38 operators in both developed and developing markets for 2013.  It shows there is increasing uncertainty in telecom revenues.  And the unregulated services (not voice, messaging and internet access) are going to become critical to future revenue growth, hence the Services Domain is fundamental to the industry’s future revenue growth as it addresses those unregulated services.

Examining some of the sources of the uncertainty in the estimates: 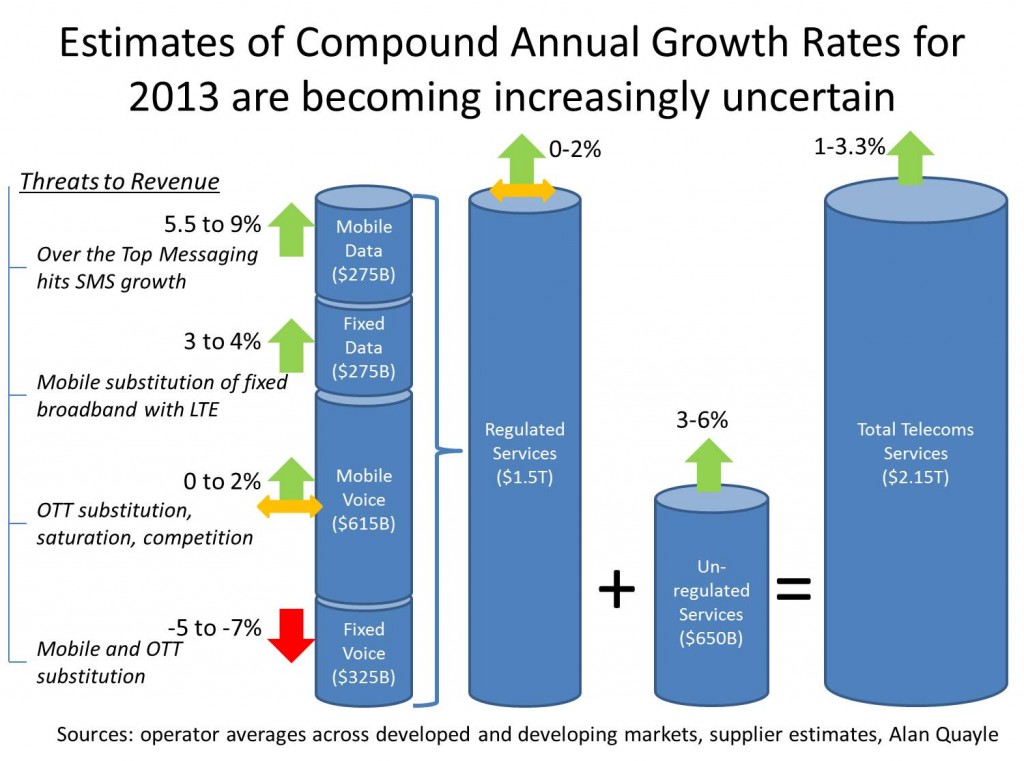 The next two figures shown below take this analysis and extending it out over the following 6 years for the regulated services only, again based on supplier and operator estimates.  The industry has a much better handle on the likely trends in regulated services.  Unregulated services predictions for the period were generally not available.  In the optimistic case the industry revenue growth varies between 1-1.75%, with mobile and fixed data driving the bulk of the growth, and mobile voice remaining flat and fixed voice continuing its decline.  Giving a total regulated revenue of $1.6T in 2019.  In the pessimistic case the decline varies between flat in 2014 to a nearly a 2% decline in 2019 with a total revenue of $1.4T.

Developing markets are much more upbeat on their revenues compared to developed markets, but developed markets dominate by revenue.  At first sight the graphs shown below look broadly similar; however, it does not reflect what will happen to the stock values if the industry does enter such as revenue decline.

Service Provider P/E (price earnings ratio) are currently 15-30, while for a commoditized industry, such as paper or cement, the P/E is 3-5. This difference impacts the industry’s ability to invest, its head count, salaries, etc.  Essentially an organization 5-6 times as small will be required.  So the optimistic view is business as usual.  While though subtle in the graphs, the pessimistic view heralds a quite dramatic restructuring of the industry. And from the survey I’m conducting, we’re just not sure where we’re going to be between these two.  Though the emotional bias of those interviewed is towards the pessimistic.  This is a distinct change from the continuous growth of the past three decades.  We’re entering uncertain times.