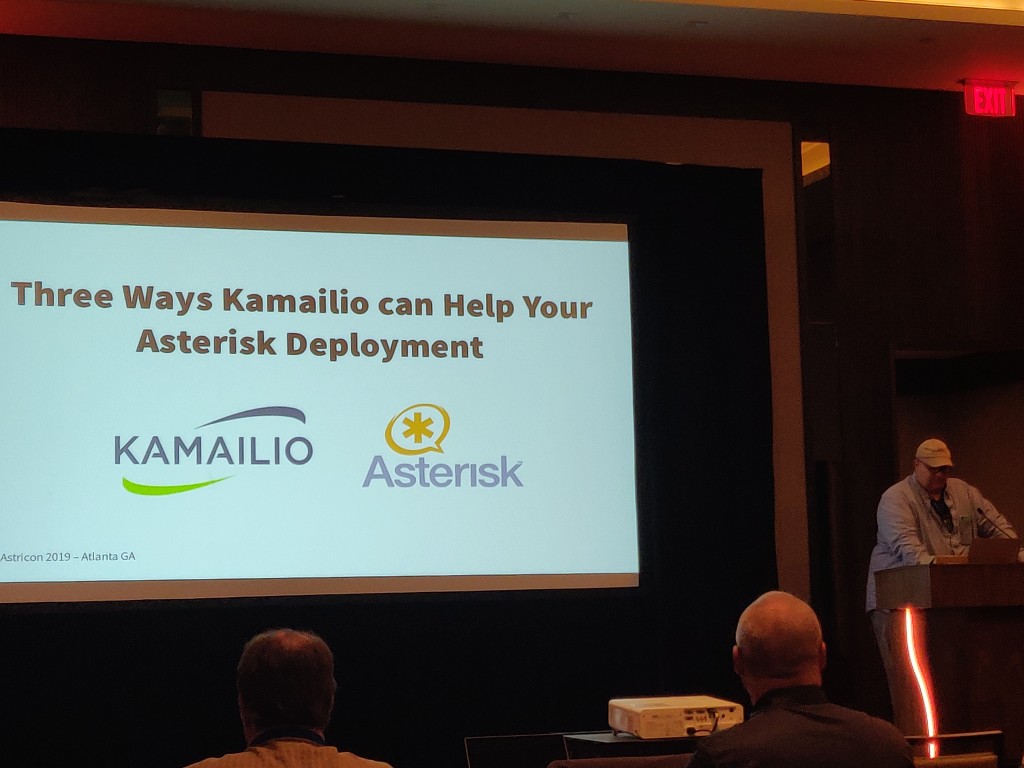 This was my first Astricon in-person. I’d watched the videos and twitter stream remotely in the past. For reviews of Astricon by old-hands, rather than a newb, check out Fred Posner’s review and Dan Jenkin’s review.

The power of any open source project is its community, together they make change happen in a market. The community is not only about the creation, maintenance, and evolution of the core product; it’s also about all its commercial applications.

For me, the main value of Astricon was the conversations with the many small and medium sized companies deploying Asterisk, FreePBX, Wazo, as well as the commercial products in the Sangoma portfolio such as Switchvox, PBXACT, phones and gateways.

Astricon is not an event talking about potentialities, it’s an event focused on meeting customers’ needs today. Astricon has the most diverse audience of any ‘customer’ event I’ve attended. Its immense value for more than ‘just’ the Asterisk community to take part. Anyone involved in programmable telecoms / communications should be here.

There needs to be clear separation between the Asterisk sessions and more business focused sessions. I think there’s much value in having both conversations running in parallel and mixing up the people, as it will make the project even more successful.

One clear trend from the many channel conversations is the growth of specific IoT use cases (e.g. asset tracking, security) that are deployed around PBX/IT deployments. This has little to do with the PBX, and everything to do with the outsourced IT role the providers play for their customers. This use case is an example of why having something in parallel with Astricon can help maximize the value for the many small and medium businesses that have committed to Asterisk and need to grow their business to meet customers’ needs.

This year the new business for some of the channel partners is video to improve the asset tracking and security use cases. For example, the key card is authenticated, and you have a picture/video of the person entering, to ensure the card and person entering match or simply for evidence. For next year, I recommend Astricon have practice sharing sessions on IoT and video applications / solutions. Not IoT platforms, not IoT visions, not AI-based IoT magic. Stuff the channels can deploy and solve customers’ problems immediately.

Announcing Jared Smith as the Vice President of Open Source Community Development is an important step as Sangoma learns how to be the best custodians they can be for Asterisk. Jared gave one of the geekiest presentation I attended at Astricon on FreePBX 15, it was fun and I learned much.

Sangoma were frank, they’ve made mistakes in their communications around open source and want to do better. Astricon was definitely interesting, this is a project in transition, with massive upside across the community and related open source communities if they can get the recipe right.

With a free core product, the diversity of applications and business models at Astricon is far greater than any other customer event I’ve attended. The openness of discussions and sharing of business experience was unique. For some it’s easy to right off open source as, “look at those people making money off your product investment without paying you anything.”

The world is more complex than that, some do take a free ride. I run events where potential sponsors turn up, eat my sandwiches and leave without ever sponsoring. But that’s OK as most potential sponsors pay, and regardless the sandwich-only people contribute to the discussions, and hopefully hire a few of the people taking part which improves the overall success of the event. Open source must be viewed in aggregate not individual cases.

I show below a slide I shared at TADSummit Americas earlier this month. OpenSIPS and Kamailio are clearly more loved than Asterisk and FreeSWITCH. When I asked people at Astricon about this difference, there was a common refrain. There needs to be a clear separation between the open source project and any commercial enterprise. OpenSIPS and Kamailio focus on maintaining that separation, while with Asterisk being owned by Sangoma and the significant overlap between FreeSWITCH and SignalWire has an impact. 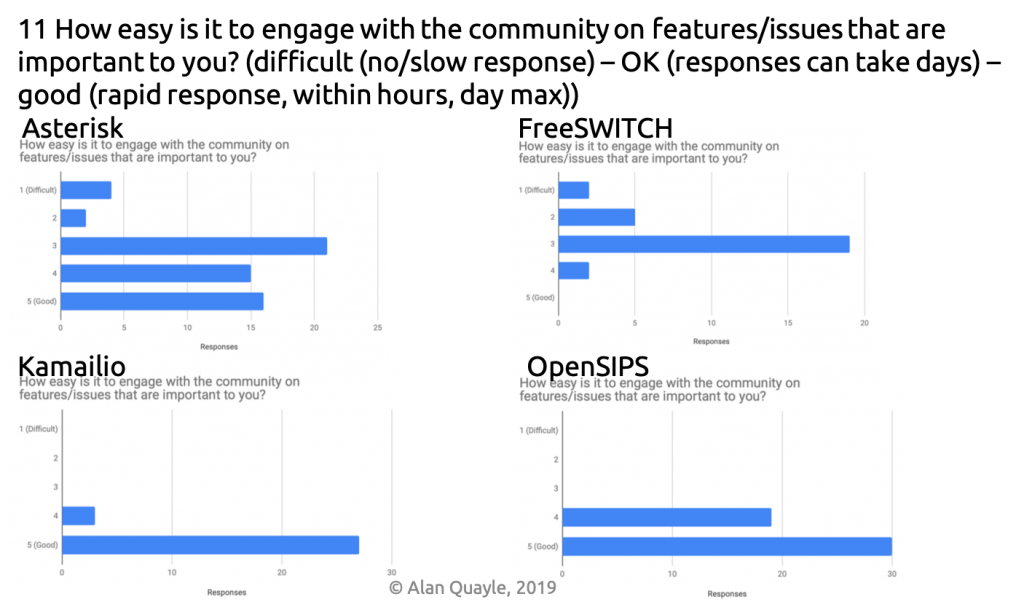 You can review my keynote slides with some commentary here, its best to listen to the audio and flick through the slides, as the video is a bit boring, just me talking and occasionally pointing at a screen you can not see.

The bottom line is any business with enough technical skills can fork an open source project. Many UCaaS and CCaaS providers have either done so or are prepared to do so. So open source dependency is not a fatal business issue, rather a potential annoyance. The upside far exceeds any potential downside in using open source software.

I concur with Fred and Dan that longer sessions in the Astricon tracks, of 40 mins with 5 mins swap over would be good. These presentations include demos and provide education, so allowing enough time is essential.

For the Business track it could be 2* 20 mins presentations with a synchronized swap-over between the Astricon and Business tracks. Having 3 tracks ensured there was good attendance, several times I wanted to attend all 3 sessions simultaneously, so recording and making the slides / content available is important.

Perhaps 4 tracks would be doable, but no more.  Having a business track definitely was of interest to the channel partners. It helps drive the success of the community, and address many issues that go beyond Asterisk, e.g. video and IoT use cases. Potentially it could also bring in those larger companies that have forked Asterisk, they should still be part of the conversation, open source is here to stay. The bigger and more vibrant Astricon can be the better for the Asterisk community.

Dan Jenkins “Getting started with WebRTC”

Dan can be relied upon to give highly accessible and entertaining presentations. It was timely to review WebRTC. To show how the open source project is pervasive across most web communications.

I wrote about WebRTC in 2017, highlighting similar points to Dan. On reflection the Civil War I predicted was not an open battle, rather a labyrinthian political standardization cold war, which continues as we’re still waiting on WebRTC 1.0…

The 2 take-aways I think are the most important from Dan’s presetnation are: the getStats () API and including web-context. I remember back in 2010 working with a start-up on the web-context idea. Nearly a decade ago!

Dan gave a demo, and with most demos there was a hiccup. This is a common challenge I face with many RTC services; the combo of multiple browsers, desk-top apps, and firewall issues is making demos and even using RTC services less reliable at the moment. To improve the chances of demo success I use a mobile hotspot to avoid firewall issues (if there’s enough mobile coverage), running just one browser (I have most success with Firefox) and no RTC desktop apps running like Zoom or WhatsApp or Matrix. We shouldn’t kid ourselves that our work is done in RTC, there’s still much too do.

I’d sent Fred some props in my keynote, as mashing up the open source projects is state of the art. We’ll hear more about this from the Wazo guys. Mashing up Kamailio and Asterisk is a popular choice.  Kamailio was also mentioned in the presentation from Lukas Stermann of ng-voice. Carsten, the CEO of ng-voice, presented at TADHack London many years ago and his pitch there helped win some of his initial deals. His son was born early during TADSummit. We know Carsten of ng-voice well 🙂

Kamailio, is many things, it’s an open source IMS core. It’s also an extremely performant SIP router. Which enables projects like Asterisk in conjunction with Kamailio to achieve massive scale deployments. See my keynote for evidence from an open source survey on this.  Fred’s presentation provided  a great overview of 3 core functions of Kamailio, DISPATCHER, PERMISSIONS, and the jewel in the Kamailio crown of HTABLE.

Fred also gave out some Kamailio cookies, which my wife and son enjoyed on my return home.

Sharing stories of mistakes we’ve made is not only entertaining, reaffirming that we’re all fallible, but also just might on the rare occasion help us avoid similar mistakes. Simon shares the story of ‘Mr Black’s Very Bad Week’, all because of one assumption that avoided rolling back to where things were working.

As engineers we love thinking through all the possible ways the problem we’re seeing could arise, its fun. Often it’s the thing looking us right in the face, but because its not ‘moving’ or ‘interesting’ we dismiss it.

Think of the Wazo Platform as the glue across several open source projects, with a great toolbox to help you customize and implement popular enterprise programmable communication services. Wazo Platform’s aim is: 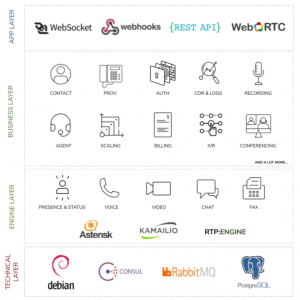 Jöran gave an excellent review of the practical realities of why you do not upgrade, until you absolutely have to; then its always a rush job that catches you out. I can not capture here how painfully funny and common their experiences are. Jöran’s final point is critical, 4 people 2 months and the upgrade is still on going.

Excellent deep-dive into STIR & SHAKEN, and how OpenSIPS implements. I learned much.

This is where stuff gets geeky 😊 Great example of the grass roots work that make Asterisk so powerful.

Jared’s presentation was so geeky, there are no slides, just this weblog.  GraphQL is a way of programmatically querying applications. GraphQL allows the API user to be more specific about the query they would like to issue to the API. This allows the interaction between the client and server to be more streamlined, make fewer API calls, and be more performant.

Developed by Facebook, GraphQL is a “data query language”. It’s a specification for how to query an API over HTTP or HTTPS. GraphQL is also used to query a server via HTTP or HTTPS and get a response — just like REST. Unlike REST however, GraphQL lets you specify the exact fields that you want returned. A client tells the GraphQL server exactly what it wants the response to look like, by sending the server the layout it wants for the responses.

GraphQL is better at dealing with hierarchical data. Using REST, makes for a lot of back-and-forth requests for linked data. GraphQL, on the other hand, follows relationships between objects. It’s also strongly typed, and introspective. That means that there is built-in support for asking the server which methods are available, and which types of data can be returned. Jared walked through some examples. Check out Jared’s weblog to see more on GraphQL support in FreePBX 15

And finally, Wazo were a sponsor of Astricon, and gave a number of well-attended presentations reviewed in this weblog. The last presentation I attended was given by Jérôme Pascal, CEO Wazo, before I headed to the airport. This presentation is more strategic, and makes the case for Wazo across the domains of control, open source, programmability, and usability. See below.

Hopefully see you next year at Astricon 2020.