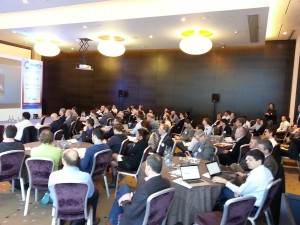 Before the WebRTC Summit we ran TADHack-mini London over the weekend, its a grass-roots effort to engage the broader developer community in the power of adding telecom capabilities and services into applications, services and business processes. Well done to everyone who took part, the mash-ups, collaboration, and use of software and hardware in the hacks was amazing. Some of the winners had a chance to present at the Summit. You can see all the videos and TADHack-mini summary here:

Industry conferences highlight the WebRTC dichotomy because it spans web and telecoms, slowly telecoms is understanding the web has won beyond the air interface, but this conference highlights the gulf that remains. And the gulf is not across all telecoms, rather the IMS bit. Which leaves many developers perplexed at the acronyms, complexity, language used, and generally how weird conversations get. Its a dichotomy that exists only from the telco perspective.

To highlight the differences:

As Tim Panton has pointed out, Telecoms is on the wrong side of history. The web has won, IMS and RCS have to change, best effort is good enough most of the time for consumers, but NOT all the time. The answers are already out there as I’ve discussion on the need to an RCS reset, and at previous IMS World Forum reviews – which I’m not attending this year as I guess they got fed up with a heretic pointing out when they say “IMS, what choice do you have?” my answer of “lots of choice, including ignoring it”.

The WebRTC Summit was better than last year, it was much more diverse, as mentioned by Dan Jenkins and several other attendees highlighted.